In the wake of Brian Flores’ lawsuit, Mike McDaniel says there are ‘no red flags’ in taking over as head coach of the Miami Dolphins 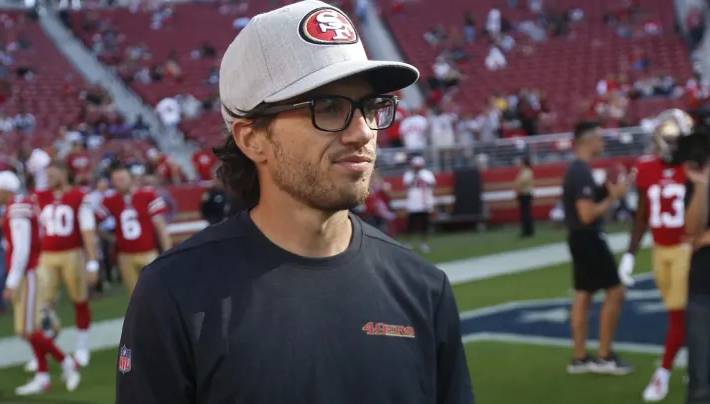 Mike McDaniel was undeterred by the controversy surrounding the Miami Dolphins franchise.
Despite allegations from former head coach Brian Flores that Ross offered Flores $100,000 for every game the team lost in 2019, the team’s new head coach, speaking to the public for the first time since being appointed on Feb. 6, commended Dolphins owner Stephen Ross for his devotion to winning.

“I can honestly say there were absolutely no red flags — and the reason why is because I was stepping into an organization with a boss who, I don’t think people give it it’s proper due,” McDaniel said Thursday. “The city of Miami is lucky to have an owner that, right, wrong or indifferent, all he cares about is winning. As a coach, that’s literally all you’re looking for.

McDaniel, a former offensive coordinator for the San Francisco 49ers, is a first-time head coach in Miami following five seasons in San Francisco, where he was praised for his unique play design and ingenuity.

McDaniel is referred to as a “genius” by some, according to Ross, who has received calls from NFC West coaches who appreciate his football knowledge but ultimately “want him out of the division.”

According to ESPN, Sean McVay of the Los Angeles Rams and Matt LaFleur of the Green Bay Packers were among those who called Ross to vouch for McDaniel.

Ross also laid out the Dolphins’ command structure, stating that McDaniel will report to general manager Chris Grier. Grier is thought to have delegated personnel decisions to the team’s head coach in past coaching stints, but McDaniel claimed working with Grier was one of the job’s selling factors.

“He isn’t interested in ego and agenda,” McDaniel said of Grier. “He is interested in a bond with the head coach that excels and beats other peoples’ bond. He wants to gel as a unit.”

McDaniel stated that he would have a role in personnel decisions, hinting that Grier’s method of shutting out his head coach was not his way. He also revealed that the Dolphins’ offensive, defensive, and special teams schematics will be “unique” and “suited to our personnel.” One significant change for McDaniel is that he has stated that he intends to call offensive plays.

Despite being the offensive coordinator, he was not the primary playcaller in San Francisco, but a league source informed ESPN that the process was collaborative and that McDaniel was occasionally calling plays at the end of the season. But his desire to do so in Miami isn’t motivated by ego; he claims to have learned a lot about the process while working under 49ers coach Kyle Shanahan.

“One thing I’ve noticed in my journey is that successful playcallers don’t isolate themselves — they utilize the people around them,” he said. “If you’re a head coach and calling plays, you better feel very good about the people on your offensive staff.”

The offensive genius inherits a team that finished 22nd in total offense in 2021, including 30th in rushing — McDaniel’s forte in San Francisco.

He also inherits quarterback Tua Tagovailoa, the fifth overall pick in 2020, who is coming off an injury-plagued second season. When asked about Tagovailoa, McDaniel defined him as a player who is “working to get better,” but stressed that he is ultimately a part of the team.

“I’m not sitting here concerned with how good Tua can be,” he said.

“I’m concerned with, as a collective unit, what we can grow together, because that’s what wins.

It’s my job to make sure he has the best chance to showcase his talents.”

Miami has put together its best two-year stretch since 2003 in terms of total wins, with 19 over the past two seasons. But the Dolphins have not made the playoffs since 2016, won a playoff game since 2000 nor won the AFC East since 2008.

Ross called Thursday an “exciting day” — one that brings the Dolphins a step closer to ending those aforementioned droughts.

“We looking forward to [McDaniel] working with us and creating a team that will win Super Bowls,” Ross said. “First we’ve got to start winning our conference and division. … That’s what we’ve always said that we wanted, a team that can win consistently.”