Brad Marchand of the Boston Bruins was punished for a career-high six games; repeat offender status was listed as a cause. 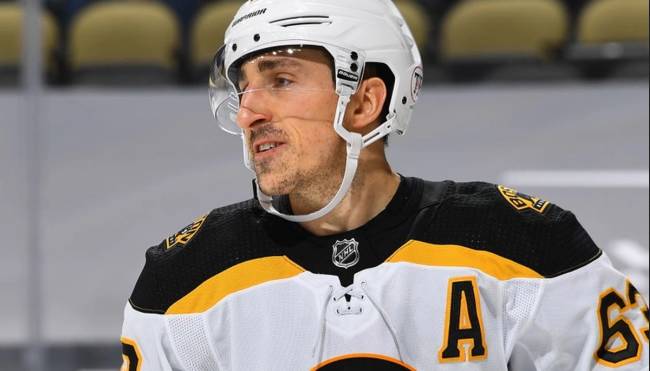 Brad Marchand of the Boston Bruins has been suspended for six games for roughing and high sticking Pittsburgh Penguins goaltender Tristan Jarry.

The ban was announced by NHL Player Safety on Wednesday night, following an in-person hearing with Marchand earlier in the day.

Marchand has already been suspended for three games this season after slew-footing Oliver Ekman-Larsson. This will be Marchand’s ninth and longest suspension, following two previous five-game bans.

Marchand and Jarry were involved in an altercation during Pittsburgh’s 4-2 win over Boston on Tuesday. Jarry had just smothered a puck as the Bruins trailed by two with less than a minute to play in regulation. Marchand was nearby, and after what appeared to be a conversation between Jarry and Marchand, the Bruins winger launched a swing at him.

Unsurprisingly, Marchand’s punch attracted several of Jarry’s teammates into the melee. Linesman Andrew Smith was also involved and attempted to get Marchand off the ice and away from Jarry, but Marchand managed to elude Smith long enough to hit Jarry’s mask with his stick.

Marchand received a five-minute match penalty for attempting to hurt and a two-minute roughing call as a result of the altercation. Because the brawl occurred in the final minute of the game, it was automatically subject to NHL review.

Bruins coach Bruce Cassidy said he saw a replay of what transpired after the game and observed a definite “lack of discipline” on Marchand’s part at the moment, but Cassidy also highlighted that something certainly triggered Marchand’s rage toward Jarry.

“It looked like some words were exchanged,” Cassidy said. “I don’t know if there was an incident at the end of the second period that precipitated it. I was in the room, so I don’t know. Someone said that. Still, you’ve got to have better discipline at the end of the day. Brad’s a leader on our team. He needs to control his emotions in that situation.”

If Jarry was concerned by Marchand’s actions, he didn’t show it during a postgame news conference in which he played down the incident.

“I think it’s just the heat of the moment,” Jarry said. “Everyone’s battling hard out there, and he’s just trying to get the puck to the net … it’s part of the game, and [what happened] stays on the ice.”

This season, Marchand leads the Bruins in scoring with 21 goals and 49 points. Losing him would be a blow under any case, but especially now, when the Bruins are also coping with an upper-body injury to captain Patrice Bergeron, which occurred in the same Tuesday game. Bergeron will miss Boston’s game against the Carolina Hurricanes on Wednesday, and a return date has not been set.